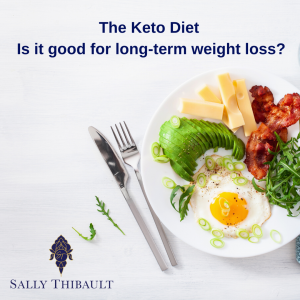 THE KETO DIET – IS IT GOOD FOR LONG TERM WEIGHT-LOSS?

As a wellness coach, the one question I get asked a lot is – is the Keto Diet good for me? In the 1980s a diet similar to the Keto diet was extremely popular, especially as it came off the back of another very popular diet at the time – the Pritikin diet.

The Pritikin diet that was popular in the late 1970s, was based on extreme low-fat dieting. That meant no fat…on anything… The chicken skin was not allowed, fat had to be removed from all meat before dry frying or BBQing. No creams, sauces or salad dressings meant one thing… food tasted bland and terrible. But in those days, it was believed that heart disease and high cholesterol were caused by fat in diets.

In the early 1980s, those findings were found to be untrue and high fat and low carbohydrate dieting – the premise of the Aitkin’s diet – became popular.

And why wouldn’t it? After being in ‘low fat’ jail for years, many people who had shunned things like cream or cheese were suddenly diving into huge steaks, with hollandaise sauce and salads with cream dressings, because, as long as you didn’t eat the bread or pasta, you were OK. It was like we had all died and gone to food heaven!

Many people lost weight initially but ended up with symptoms such as constipation, and bad breath. And the diet justifiably lost its appeal.

But then in the early 2000s, the new version arrived. This time it was called the Keto diet, once again promoting high fat, high protein, and low carbohydrate, to lose weight fast.

Keto works by forcing the body into ketosis, a state in which it burns fat rather than carbohydrates.

And while the diet has been found to be beneficial for a couple of medical conditions, such as epilepsy and the treatment of Type 2 diabetes, it has also been promoted as a fast way to lose weight.

When celebrities such as Kim Kardashian, Halle Berry, and Katie Couric, start talking about their fast weight loss, using the Keto diet, suddenly it became the ‘diet’ to follow!

But there is a very valid reason why, for the second year in a row, the Keto diet has been ranked amongst the worst diets in the world for long term health. It ranks near the bottom – number 38 out of a possible 40.

Nutrition experts are justifiably concerned about Keto, as the high emphasis on animal fats while demonizing carbohydrates especially those from fruit, vegetables, nuts, and seeds. In fact, fruits such as bananas, raisins, and mangoes are discouraged on the keto diet, as they are high in carbohydrates, yet no-sugar soft drinks are allowed.

Diet soft drink vs a banana?? Let’s see – a fruit grew from a tree, which contains vitamin C, manganese which is great for your skin, potassium for heart health and blood pressure as well as giving you energy! This versus a drink created in a lab, made in a factory and contains artificial ingredients that are manufactured…. Including Colour (150d), Food Acids (338, 331), Sweeteners (951, 950), Flavour, Caffeine, and Phenylalanine.

Have we all lost the plot?

Keto, while similar to the Aitkins’ diet also has many ‘unattractive’ side effects including constipation, lethargy, vitamin deficiency, muscle loss and, in some cases can lead to kidney stones!

But the main problem with any diet that involves restricting certain food groups in the pursuit of intentional weight loss, is they are impossible to maintain in the long term – it doesn’t matter what it’s called.

Instead of dieting, learning to embrace Intuitive eating, where there is no restriction at all to the foods your body needs, is the most effective, simple and sustainable way to releasing the weight that no longer serves you and maintaining long term health.

When you understand the underlying cause of excess weight, and why we reach for certain foods in times of stress, overwhelm, frustration or any other myriad of emotions, your body will find its own natural set point, without dieting!

At the Living Lighter event you will learn how to ditch that diet mentality ( or any diet mentality) for life and discover how trusting in your own body’s wisdom is the true key lifelong wellness and health.