Janet Culpitt is a renowned Networking Expert amongst the Gold Coast and Brisbane community.

She has used networking to grow a six-figure income and teaches business owners how to use this approach to increase their own businesses.

A regular contributor to various Business and Networking magazines together with her EBook , “7 Secret Networking Tips Revealed” ,she shares her expertise to many readers.

Janet and her husband Steve, formed their business, Arrow Focus on Wealth, in 1999. They each have over 30 years’ experience in the Financial Services arena. And have clients that have remained with them since the beginning
In the early days of their business,

Janet discovered that she could achieve good referrals for their business through networking if done the correct way.
Her role in the business grew from Business Manager to become “Rain Maker” proving her expertise and natural ability to meet new contacts and develop relationships that result in both new business and continued growth for all parties.

The success of her networking led to the development of Networking with Janet, a business which runs workshops for Networking with Confidence to bring together those new to networking and wanting to know where to start.
Her existing connections from the various groups she is a member of and her business alliances from the Financial Planning practice who work as a united team for their clients good.

Janet and Steve have four children, and two grandchildren and operate their two thriving businesses from their home acreage.
You can find her at http://www.janetculpitt.com.au/
Or her closed facebook group https://www.facebook.com/groups/networkingwithconfidence/

Click on the image below to listen to the heart-centred conversation with Janet Culpitt…..

????THANK YOU so much for listening and if you know someone who may enjoy this blog “Reclaim You Podcast Episode #2 with Janet Culpitt” Please share 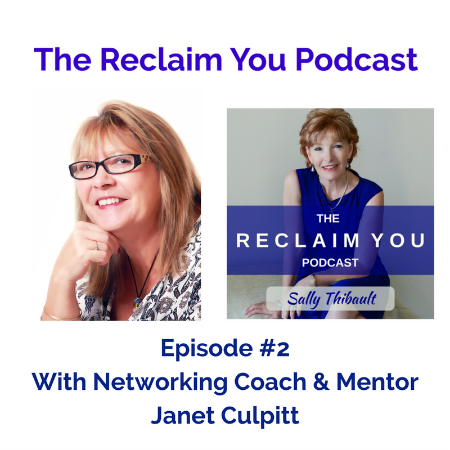